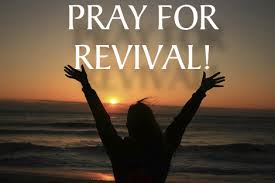 “Oh, that you would rend the heavens and come down, that the mountains would tremble before you.” Isaiah 64:1

Many across America are crying out for a mighty revival to come to the United States. This is what an awakening looked like a century and a half ago in New York City—

The Fulton Street prayer meeting (1857-1860), convened by a simple New York merchant, Jeremiah Lanphier, actually helped spark revival around the globe. By February 1858, many churches and public buildings in downtown New York City were filled with tens of thousands of people praying. Newspapers began covering “The Progress of the Revival” on a daily basis, and at the peak of the revival, conversions numbered 50,000 a week. Out of a total population of 30,000,000 people, 1,000,000 were converted to Christ across the nation. One account declared that between 1857 and 1859 2,000,000 converts were added to the Church. The following account of the revival was given:

“Such a time as the present was never known since the days of the Apostles…. Revivals now cover our land, sweeping all before them, exciting the earnest cry from thousands, ‘what shall we do to be saved?’ Ministers…baptized with the Holy Ghost…preach with new power…The large cities and towns…from Maine to California are sharing in this glorious work. It really seemed as if the Millennium was upon us in its glory.”

By March of 1858, 6,000 were also gathering daily for prayer in Philadelphia, and thousands were attending five different prayer meetings in Washington, D.C. A contemporary newspaper article stated: “There are several New England towns in which not a single adult person can be found unconverted.”

O Blessed Holy Spirit, do again what you did in Washington, D.C. and in other cities in 1858! Set your people to praying as never before that we might see again the holy fire fall! In Jesus’ dear Name. Amen!

P R A Y E R F O C U S
• Today in your own secret place of prayer as fasting, ask Him to lay His prayers and petitions upon your heart.

Error: Twitter did not respond. Please wait a few minutes and refresh this page.